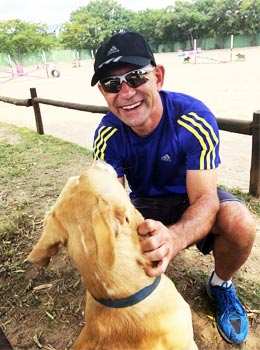 Alberto Leitao is a life strategist, hard hitting charismatic transformation and vibration alignment coach with his primary focus being in developing individuals, facilitating positive change and tailoring life strategies that drive the individual to fulfillment.

He is the founder of the Martial Science Institute and Universe In you coaching and Consulting Services with specialist skills in Bujinkan Tai Jutsu, Yoga, Pilates, life strategy and transformational coaching.

He is highly intuitive and uses this ability to guide individuals to achieve higher states of living and achieving fulfilment. A master communicator with experience in coaching diverse teams, one on one coaching, instructing students in Martial Arts ranging from children to adults.

Alberto’s drive and passion is driven by a consistent philosophy of the betterment of humankind and is a student of Bujinkan Tai Jutsu, mindfulness, meditation, quantum physics, neuroscience, neurogenesis and epigenetics.

Alberto’s ability to openly communicate and garner a loyal network comes from his diligence in ensuring that truth prevails and a diligent work ethic in ensuring that the people he meets are much better placed to achieve their personal goals and dreams.

He has presented to small and large audiences captivating them with his natural charisma and style. Alberto is a qualified Bujinkan, Yoga and Pilates instructor.

Alberto’s other philosophy of never giving up has allowed him to come up with ingenious life skills and with his constant focus on improvement and sharpening the saw.

This allows for a diverse background of experience ranging from navigating personal relationships, personal goal setting, fitness programs, mindfulness exercises, meditation, personal finance management, unarmed and armed defense and a whole host of intuitive tools to assist those he coaches to transform to the greatest version of themselves.

He has done this with a committed work ethic and a visionary mind set and has a natural ability in predicting successes. He is highly passionate and committed to the development and unlocking the very best in human potential and the success they achieve through his coaching, mentoring and seminars.

He is an energetic master communicator that believes in the betterment and contribution that he makes to society to ensure that teams, individuals and those he comes in contact with are better placed to fully develop into realized and robust individuals able to meet the demands of daily life and perform at their very best.

Alberto has a love of martial science as he aligns with the principals of honor, dedication, discipline and the health outcomes it brings.

He started his tenure in martial arts with Ju-jitsu and within a year qualified to green belt. He moved on to Bujinkan as he always yearned to know how energy works and this martial science was closely associated with that principal.

He was also exposed to Ku or better known as the five elements and the accompanying styles that accompany each element. He has trained in the techniques of Bo, Jo, Katana, Kusari-Fundo, Shuriken and knives.

Alberto trains in Bujinkan with the support of the South African Shihan who is ranked 15th Dan Black belt in the Bujinkan martial art.

Alberto’s dedication and passion in equipping children, ladies and humanity with a robust set of tools that ensures their health, their ability to best protect and defend themselves as well as assisting students to achieve balance in all areas of their lives is prevalent in all his training.