Get Your Business Started With Flat Responsive

Use Flat Responsive theme to create your business website as it is SEO optimized.
Enjoy the flexibility in design and functionality provided by this theme.

For official updates regarding COVID-19 from the Department of Health, please visit: www.sacoronavirus.co.za

Martial Science Defense is based on Bujinkan Budo taijutsu, which comprises of nine different lineages dating back to at least the 12th century. Each school denotes a particular set of techniques such as the ability to effectively defend one’s self through distance, angling and timing.

Students are taught how to understand how to use subtle but effective techniques to be able to defend and protect themselves.

The techniques are strategic but are also fun. The atmosphere is positive, supportive and builds a sense of comradery as well as confidence. The techniques are effective in honing the ability to understand the bodies place in space as well as honing core muscle strength and mental agility.

The techniques also teach students on how to use an aggressor’s momentum to their advantage, as well as grappling and natural movement to overcome a larger or stronger adversary.

The Bujinkan organization incorporates the teachings of the martial arts lineages (ryūha) that Masaaki Hatsumi learned from Takamatsu Toshitsugu under the banner of Bujinkan Budo Taijutsu. 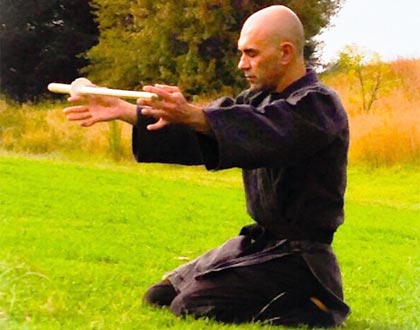 Martial Science fitness is based on Junan Taiso which has components of Yoga, Contrology and breath awareness techniques. The program forms the foundation for building suppleness, strengthening core muscles as well as ensure an overall sense of wellbeing.

Martial Science mind has its basis in teachings on Fudoshin (Immovable heart) and Mushin (No Mind). The focus is assisting students to live lives in the present and in being confidant and capable of achieving the goals and the life they would like to lead.

This is achieved by using powerful tools such as mindfulness and meditation techniques in their daily lives.